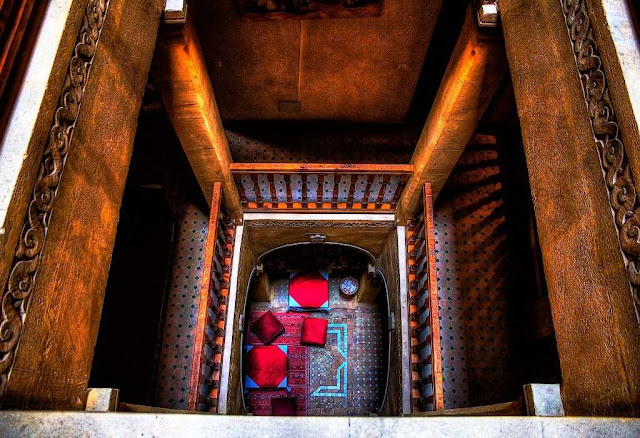 On the way to Morocco? How about a superb riad in Essaouira for your stay? Discover our picks for the city's most gorgeous riads!
Formerly named Mogador, the city of Essaouira is unique in its mix of cultures. The Phoenician and Roman eras collide with Portuguese history. But make no mistake: you are in Morocco. And who says Morocco says… Riad! These traditional houses of the country have a very particular architecture: floors that overlook an interior patio often fitted out with wells, swimming pools, plants, and furniture covered with zellige, Moroccan tiles. The riads also have roofs to enjoy a tanning session, observe the city seen from above and listen to the Azan of the Muezzin. Here is an overview of the riad in Essaouira, with our selection of favorites!

Location on Google Maps
Budget: between 30 and 40€ per night

The Emeraude Riad is a little gem from the 18th century, located in the heart of the old town. With its three floors, its ten bedrooms, its large patio, and its two terraces, it will be a residence of choice for you to relax! Its interior decoration is refined: the wood mixes with the traditional white and blue shades of Morocco.

Also, its location is convenient, since the Emeraude Riad is close to the Bab Marrakech gate. Thus, you will find yourself close to all amenities: car parks, bus terminals, and taxi ranks to go on excursions for example. Finally, you can also enjoy a delicious traditional breakfast on the roof terrace and enjoy an incomparable view of Essaouira.

Location on Google Maps
Budget: between €45 and €72 per night

The Riad Al Medina, which translates into French as “Riad of the old town”, is a pearl of elegance. There are single rooms, family suites, and even a suite with direct access to the terrace to choose from. This Riad in Essaouira will above all seduce you with its decoration: a patio with a fireplace, but also a Hammam with the possibility of having a massage. In addition, it is also transformed into a restaurant: you can taste Tajines, couscous, and other Moroccan dishes. Bssaha (bon appétit!).


In addition, Riad Al Medina offers quick access to Essaouira beach, which is 200 meters away. Also, it is close to the ramparts and the Kasbah Gallery for a short artistic break.

Do you want a luxury riad? The Dar Maya will be able to offer you an incomparable service. Also located in the historic city, this riad in Essaouira offers five bedrooms with marble bathrooms and fireplaces. The walls of the bedroom are covered with traditional lime and black soap coating: Tadelakt. The Dar Maya is also a haven of peace and relaxation. Indeed, you can spend a relaxing moment in the hammam and benefit from exfoliating treatments. You'll also find a swimming pool on the roof!


The Dar Maya also offers a catering service and in particular a menu consisting of three Moroccan dishes, which vary according to the arrivals.

Do you prefer to book a riad in Essaouira outside the old town? No problem! If the riads are traditionally the dwellings of the medinas, several riads have been built near the city. Riad Dharma is located 20 minutes by car from the historic center of Essaouira and is an oasis of relaxation. The hotel has seven air-conditioned rooms with bathrooms, fireplaces, and all the amenities.


The Riad Dharma also has a jacuzzi, swimming pool, as well as a traditional hammam. In short, you will be pampered, even down to the breakfasts which are carefully prepared by the riad's cook.

Location on Google Maps
Budget: between 40 and 50€ per night

If you like the Berber style pushed to its climax: we have found YOUR Riad in Essaouira. This authentic and welcoming Riad in the old town immerses you in the best of Moroccan craftsmanship: Tadelakt coating and Zellige mosaics. The Riad Laylati offers 5 bedrooms on three levels, as well as a double terrace that offers a lovely panorama over the Medina.


And if you appreciate local craftsmanship as much as Moroccan cuisine: you will be served! Riad Laylati's breakfasts are renowned for being gourmet. For an additional 65 Dirhams per person, treat yourself to a tasty couscous or Tagine for lunch or dinner.

Riad House of the South

Location on Google Maps
Budget: between €30 and €85 per night

This 18th-century style riad is located 300 m from the ocean. If you want to go for a swim in the early hours of the morning, it's your best ally. It is also between two of the biggest commercial streets in the old town! But it is the history of this Riad in Essaouira that will entice you the most. Indeed, the Maison du Sud was successively the property of wealthy merchant families, first Jewish, then Muslim. These ensured the trade of goods between Europe, but also with Timbuktu.


Also, the Riad Maison du Sud offers several services, particularly in terms of catering. So pick one of the five rooms and embark on a journey through time!.

Budget: around 20€ per night

Service: ★★
A riad in Essaouira that is particularly inexpensive! Here, what matters is the atmosphere. Your host, Azdine, will know how to welcome you as if you were part of his own family. In Essaouira, you will be welcomed with distinct hospitality that will make you feel at ease. You can also benefit from all the advantages of a riad in Essaouira: breakfast in the sun on the roof, as well as proximity to the beach and the markets.