Sabah is the northernmost part of the Island of Borneo, north of the Sultanate of Brunei, and is one of the most remote and picturesque parts of Malaysia. The region is dominated by a 4000-meter volcano called Mount Kinabalu and is swathed in tropical rainforests that are one of the last refuges of wild orangutans, but it’s the islands and the amazing diving experiences that are now drawing adventure travelers to Sabah.
In this post, I want to introduce you to what I consider to be the 8 top island destinations in Sabah which include some of the best dive locations in Asia.
But first, let’s talk about how to get there. Sabah is easily reached from Kuala Lumpur, the capital of Malaysia and one of the international and regional airline hubs of Asia. Depending on which island you choose, you will want to fly into Kota Kinabalu on Air Asia or Malaysia Airlines at a cost of about US$200 round trip.
Now let’s look at why you might want to go there. Mostly you’ll be going diving so let’s look at what’s under the waters off Sabah, Malaysia! 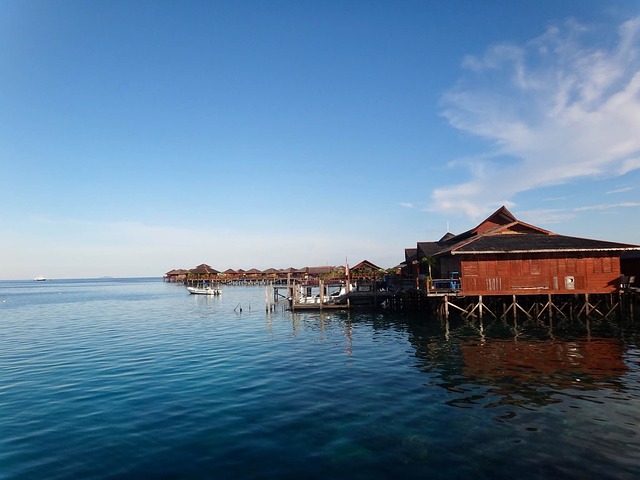 Now that you know why you want to go, it’s time to look at where you want to go. There are lots of options to choose from off the coast of Sabah, some close and some further off-shore. Some are island paradises with amazing resort facilities while others are basic but stunningly beautiful.
Finally, let’s talk about when to go. For much of the year, the temperatures around Sabah will be 25-33 degrees C and the islands are blessed with sea breezes that keep them very balmy. There are southwest monsoons from June to August and northeast monsoons from October to December, so these are probably the only times to avoid as visibility will be more limited. During the southeast monsoon from May to September, the wind is gentle and the seas are calm and clear.
For those who can’t bear to be disconnected, your mobile phones will work in many of the island resorts off Sabah and the more up-market resorts usually have good wifi. Celcom has a good sim card that’s worth buying while in Kota Kinabalu.
Just a tip before you make too many plans … check tides4fishing.com to see what the dive conditions are expected to be like for the dates you’re planning to go, and be aware you may have an 18-hour layover at Semporna because of flight and boat connection times.

Kapalai Island is located about 15 km west of the coast of Sabah. Once a stunning and picturesque tropical island, it has unfortunately degraded to little more than a sand bar that’s barely above water at high tide, but the resort built on top of the reef is a marvel of its own.
There are daily flights to Kapalai from Kota Kinabalu which is only an hour away, or from Singapore and Kuala Lumpur. Planes can’t land on Kapalai itself, so the flights land at a nearby town called Tawau, and the staff from Sipadan Kapalai Dive Resort pick you up in a fast boat.
The resort itself is fantastic with beautifully appointed rooms built out over the water. There’s an old wing and a new wing, but the bungalows in the new wing are much nicer and quieter. Whatever room you have, you’ll be blown away by the views and the room service.
The dive resort is the central focus of the island and there’s not a lot more to see on land. But there is a lot to see and experience under the water with a submerged reef and a half dozen well-structured dive sites just off the island.

Sipadan Island is a bit more developed than Kapalai but the core activity is still scuba diving.
Like Kapalai, nearby Sipadan Island is focused on scuba diving and is accessed by boat from nearby Tawau and the port town of Semporna. Sipadan is the only oceanic island in Malaysia and has a little more to offer the intrepid traveler with sandy beaches, snorkeling, and a choice of three resorts. There are also monitor lizards that come out from the scrub to bask on the sand.
The sea here is absolutely alive with jackfish, napoleon, barracuda, sharks, turtles, and much more. There are trips out to popular dive spots but if your budget is constrained there’s also a house reef where you can have unlimited time.
The most popular resort on Pulau Sipadan is Seaventures Dive Resort which, as the name suggests, specializes in dive holidays. As one visitor to Seaventures said, the mantra hear is “eat, sleep, dive, repeat”. The resort has a range of accommodation from multi-bed dormitories to private rooms, but don’t expect too much. It’s a bit like being on a ship … the rooms are small with porthole windows and the top deck is the best choice. The double rooms and VIP rooms are much larger than the standard rooms and better appointed. If you’d prefer something a bit more different, Bohey Dulang Island offers great snorkeling, amazing diving, and breathtaking views from the top of its volcanic peak. This is a chain of small islands formed from the rim of a volcano and it’s connected via a shallow reef to Bodhgaya Island as part of Sakaran Marine Park.
At low tide, you can walk all the way around Bohey Dulang Island along the narrow sandy beaches and through some mangroves. But the really adventurous visitors make the 350m climb up to the peak of Bohey Dulang for the amazing views and the bird colony where you might see hornbills, fruit dove, owls, and partridges among other species.

The Bajau Laut are sea gypsies who live in stilt houses over the water
Another popular local attraction is the Bajau Laut, or “sea gypsies”, who still live a traditional nomad way of life based mainly on fishing and spend most of their life at sea in small boats. They live in stilt houses over the water and there are estimated to be about 3000 living around these islands, although they are progressively moving into the towns looking for a better life.
The closest accommodation is on nearby Pom Pom Island which has options to suit most budgets from backpacker hostels to resorts built over the reef. Pom Pom Island Resort is one of the more reasonably priced resorts in this area and is built over crystal-clear water and white sand and a coral reef.

Pom Pom Island is one of the most popular of the Sabah Coast islands
Located about 45 minutes by boat from Kota Kinabalu, Pom Pom Island is considered to be a gem in the Celebes Sea, topped in tropical vegetation and fringed by white sandy beaches. The island is only 2.3 km around but it has a 4km fringing reef which is where most of the action is focused. Pom Pom Island is featured in the Swedish version of Survivor (Expedition Robinson).
The reef itself is flat and only about 50-60m wide at one end, although it does get out to about 1oom wide around much of the island. There are no villages or settlements here, just some resorts that focus mostly on diving in the nearby marine parks.
As mentioned above, Pom Pom Island Resort is one of the more reasonably priced resorts in this area and is built over crystal-clear water and white sand, and a coral reef.
5. Lankayan Island Lankayan Island is a tiny tropical reef with a small resort in the Sulu Sea
Located 15 km from Sandakan in Borneo, Lankayan Island is located inside a protected maritime park that’s often visited by sea turtles who return to the island’s beaches to mate and hatch. The island has very few facilities and is based on an eco-tourism concept.
Lankayan Island Dive Resort is the only accommodation on the island and has 23 rooms in a wooden chalet arrangement, all of which are roomy and have sea views.
As you might imagine, the main attraction here is diving and there are more than 30 dive sites near Lankayan Island including two submerged wrecks that are very close to the jetty and easy to get to. Mataking Island is famous for the wreck known as the Underwater Post Office
Located about 45 minutes by boat from Semporna, Mataking Island boasts sparkling white sandy beaches, azure blue clear waters, and some of the best diving in Sabah. Of particular interest to divers is the wreck of the Mataking 1, a 40-foot wooden cargo ship deliberately scuttled here to form an artificial reef known as the Underwater Post Office. Divers seal messages in waterproof vacuum bags and “post” them into the underwater mailbox.
The only accommodation on Mataking Island is the Reef Dive Resort which gets a bit of negative comment from customers because it needs refurbishing but the island itself is worth any small discomforts you might suffer staying in the resort. Many of the resort’s guests are Chinese, so the food and facilities tend to cater to the preferences of the Chinese. Mantanani Island is really three islands with the main island shaped like a knife.

Located about 45 minutes by speedboat from the Kuala Abai jetty in Kota Belud, near Kota Kinabalu, Mantanani Island is dominated by a 2.5km long white sand beach and ocean visibility of up to 40m on a good day. There are lots of spotted and marbled stingrays to see in the water as well as dugongs and some historic WW2 wrecks to dive on.
If you’re into bird watching, there are species here that are hardly ever seen on the mainland of Borneo like the Mantanani Scoops Owl and several unique species of pigeons and doves.
You can see Mantanani Island on a day trip from Kota Belud with lunch served on the island and an afternoon of snorkeling with Nemo on the nearby reef. But if you want to stay for a night or two, the Mari Mari Backpacker Lodge on Mantanani Island is a good choice but keep in mind there’s no electricity or running water here.

Mabul Island has been a fishing village for over 40 years and is one of the few inhabited islands off Sabah
Only discovered by divers in the 90s, Mabul Island has a vibrant local community of fishermen. It is located about 30 minutes by speedboat from Semporna but a lot of visitors just go there on day trips organized from Semporna.
You can walk right around Mabul Island (although it can get tricky near the wharves) but there are no roads and no cars. Most people come for diving, but frankly, you might be better off going to nearby Sipadan if that’s your passion. The diving near Mabul is what’s known as “much diving” with visibility down below 10m most of the time.