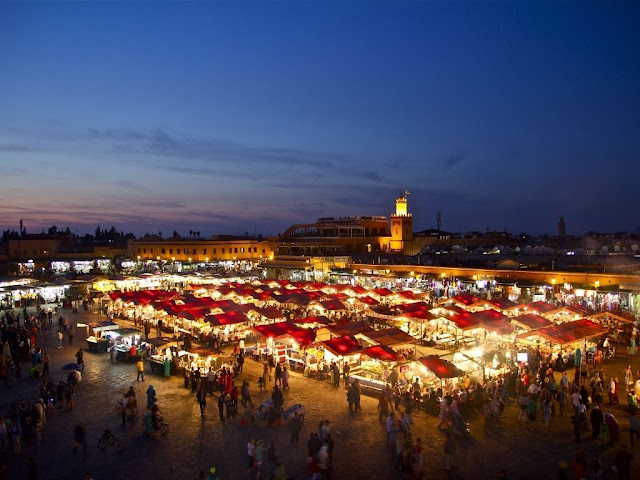 Every year, Marrakech attracts thousands of tourists from all over the world. Some come to spend only the weekend thanks to the relatively short duration of flights from Europe and the Middle East, while other travelers choose to have longer breaks in Marrakech during their visits. Around the imperial cities of Morocco.

As a tourist city, Marrakech is not very different from the tourist cities of the world. There are a number of Marrakchis or people from other regions who seek to exploit tourists for their financial gain. This article is not intended to list the innumerable beauties of Marrakech, but rather it is a guide that aims to expose some of the scams that a tourist can be exposed to and to help you avoid them and stay safe during your stay in Marrakesh.

Keep your valuables away from the eyes of thieves

Despite the concerns of many travelers, theft is not a big problem in Morocco.

In the Medina of many large cities in Morocco (Marrakesh, Fez, Tangier, Casablanca as in the large cities of the world), there is a history of petty crime, particularly in the form of theft of valuables such as wallets, camcorders, and smartphones.

Therefore, as a tourist, it makes sense to be aware of your situation at all times and to keep your valuables away from the eyes of potential thieves. Secret and multi-pocket belts are a great way to keep your cash close at hand. Also, it is recommended to keep hold of all bags and cameras. It's best to leave any valuables you don't need to be locked away in your hotel room.

But in recent years, an increased police presence (thanks to the tourist brigade) has removed many bogus guides from the city.

The false guide often approaches in a very friendly manner. He walks by your side as he begins to engage in conversation. With his background, he looks like he wants to be your friend, at first asking innocent questions like "How long have you been in Marrakech?". These questions are to gain as much information as possible to find out if you are new to Marrakech and unfamiliar with Marrakech and its surroundings.

He will ask you, “where are you from?”. Often he will have a cousin/aunt/uncle/friend who lives there. He may also tell you that he wants to improve his speaking skills and asks you to talk with him while walking. It sounds quite innocent, yet has a very dark side.

They'll tell you they don't want the money. They will show you souvenir shops that belong to “a family member or a friend”, that is where they make their money. Merchants give them commissions on every tourist who comes and buys.

Once you've served your purpose for them, and they decide they've taken you as far as they want to go, they'll give you directions to where you want to go next. Unfortunately, some fake guides will do this simply to switch you over to another fake guide as part of a scammer circuit.

• How to avoid this scam: If you need information or an official guide, contact the tourist office at +212 5 24 38 52 61, otherwise give the impression that you know where you are going and the route you should take, and politely decline all offers of assistance. Go with a plan of where you want to go and don't let anyone deviate from your itinerary. If you are being harassed by an unofficial guide, saying seriously that you will seek help from the police is also a way to dissuade them from their continued approach.

If you decide to have a henna tattoo, make it clear exactly what you want and where you want it on your hand. Henna ladies have a habit of very quickly extending their designs to your arm and asking for payment for the extra work.

Even if you haven't actually asked for a tattoo, don't get too close to these ladies, especially in the Jamaa El Fna. They will try to use their henna syringes unnoticed, offer to fix that mistake by giving you a full henna tattoo, which surely won't come for free. The result and the quality may vary, but in general, the tattoo will be of a low quality.

After they have finished, they will ask for sums of 100DH (€10) for the few minutes it took them to complete the task. They won't care if you like the end result or not.

• How to avoid this scam: beware of covered women who try to approach you on Jemaa El-Fna. And even when it's too late, pay only in coins (no more than 10DH is a fair price) if you like the tattoo, or just don't let them “hide” the henna stain. Remember: you don't have to give money for a service you didn't ask for.

All tours (official or not) will no doubt stop at a carpet or pottery shop, where the owners will delight you with their hospitality and give you free mint tea. Then they will give you a demonstration of how the rugs/ceramic items are made.

Eventually, they will use their sales tactics, including their lies about the high quality of their products and that they are antiques, in order to get you to buy their items.

• How to avoid this scam: Politely decline the mint tea and even if you end up taking it, remember that it was given as a gift, and you have no real obligation to buy anything you do not want. If you liked their products, then you had to negotiate the price. Negotiation is a culture in Morocco, you must master it if you do not want to be ripped off by sellers. Avoid shopping in tourist places like the Medina. Prefer stores in town (mainly Gueliz) that offer fixed prices.

It is illegal not to use the meter in a town taxi (PETIT TAXI = Small taxi) and yet most taxi drivers will do anything to negotiate a price with you and refuse to turn the meter.

Things come to a boil when some taxi drivers ask for an extra bribe (tip), even after being rude and providing poor service. The worst? They will constantly harass you until you give up.

• How to avoid this scam: if a taxi driver approaches you, whistles to get your attention, he is 100% a crook, do not take his taxi. Find a taxi whose driver has not done the above things. Open the front door, but don't go upstairs until you ask if he's going to turn the meter. If he accepts, tell him your destination. Then get in the car and make sure he turns the speedometer, otherwise say you're going to get off if he doesn't turn it. Some drivers agree to turn the meter on at first, then say the meter doesn't work, or just try to ignore you once you start moving. So be firm! If you can't find someone who will turn the meter, which is likely, negotiate. Most prices are between 7 and 15 Dirhams.

Unfortunately, there are also scams made by some car rental agencies, international and local, especially at the airport.

The “hidden stripe scam” is the most common. When taking the rental car, the agent makes a very brief and quick inventory. On the way back, the car rental agent makes a very long and in-depth inventory. He can even lie down on the floor to check the under body. Of course, he will find a scratch. He knew his location. Even if you pointed out that during the first inventory, you did not lie down on the ground to check the sills, his answer will be: "You should have!". Lo and behold, you'll pay extra for a lick of polish that it won't even go through, so you can rip off future customers with the same scratch.

• How to avoid this scam: make a very thorough inventory to check if the car has scratches, bumps, or scratches and report them. Do not forget that without a report, it is impossible to know if you are not responsible for these damages. Compare what is on the contract with what is displayed on the dashboard of the vehicle, to avoid any over-billing caused by conflicting information.

Luckily, there aren't many of these scammers. Moroccans and in particular Marrakchis are known for their generosity and kindness. This guide is only intended to show you how to get out of it in case you come across one of these scammers. We wish you a peaceful stay in Marrakech.