It remains the king of sport, with children and teenagers playing it everywhere, from stadiums to the most remote villages where 3 squared tree trunks can serve as goalposts. Morocco has one of the most successful clubs in Africa with Raja Casablanca. And, after several dark years, the national team (the Atlas Lions) won the Africa Cup of Nations in 2018.

But other disciplines are experiencing a certain boom, such as athletics or cycling, in particular thanks to the Tour of Morocco on the calendar of the International Cycling Union. 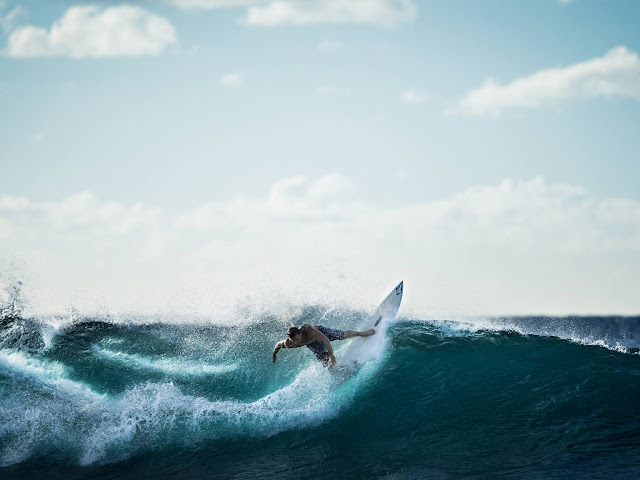 Morocco offers many possibilities for practicing water sports such as surfing, windsurfing, and kite surfing. As the Moroccan Atlantic coasts are not bathed by the Gulf Stream, the water temperature does not exceed 18 °C, even in the middle of summer!

In addition, the powerful swell of the Atlantic makes swimming dangerous, and it is recommended to stay in equipped or supervised places.

Know, finally, that the upwelling (rising of cold water from the depths), associated with a powerful thermal wind, considerably refreshes the seaside in the middle of summer in very localized areas such as Essaouira for example. If the phenomenon delights windsurfers, it is very unpleasant for those who want to tan on the beach.

Rural tourism is booming. Small hotel infrastructures are springing up everywhere in the Atlas, offering excursions and guides. Morocco is a hiker's paradise. A hike, horseback ride, or mountain bike ride is the perfect opportunity to get in touch with the people of the mountains, whose way of life is still very simple. The region of Toubkal, Jebel Siroua, has so many landscapes, and atmospheres to discover for the outdoor enthusiast.

In the mountains, the best season for hiking runs from April to October. In winter, prefer the desert. 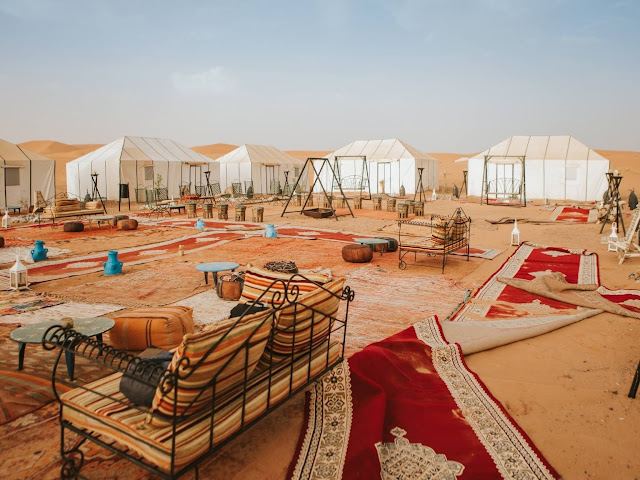 For some hikes, the services of a guide are useful, even essential (case of the ascent of Toubkal for example). But beware, there are real and fake guides (to check, ask to see their official badge and make sure it's up-to-date).

Be careful, even accompanied by a qualified guide, it is prudent to take out insurance covering sports activities in the event of a problem. And this before you leave.

Ski touring specialists have known Morocco for a long time because the central High Atlas offers many opportunities for off-piste hiking. Cross-country skiing enthusiasts will prefer the Middle Atlas and the Ifrane region, for authentic hikes in the cedar forests.

For downhill skiing enthusiasts, the highest resort in Africa is located south of Marrakech, at Oukaïmeden (2,600 m above sea level); unfortunately, the snow cover is often very unpredictable. It theoretically opens from mid-December to mid-April and has several ski lifts and a chairlift. Another station in the Middle Atlas, in Michlifen, near Ifrane, is more modest.

- Official guides: they are either local (called “city and tour guides”) or national, but offer substantially the same services. They have a badge (red for the former and green for the latter) and an official guide card from the Moroccan Ministry of Tourism. This card, with a photo, is always written in French (and not in Arabic!).

In general, national guides are licensed to take you across the country, unlike local guides who, in theory, can only guide you in their locality (which is on their map).

Tourist offices theoretically offer a list of guides (rarely up to date). But the best is to contact a travel agency or go to the offices of the guides of some tourist places.

In town, to avoid any confusion, always agree, before starting a visit, on the duration, the price, and what you want to see (including -whether or not- to visit shops).

- Mountain guides, called “natural area guides”: all qualified guides have a professional card with photos. Be careful, some official guides sometimes subcontract mountain hiking to a brother or cousin... who is not an official guide. Systematically refuse and never pay in advance so as not to be stuck. Only go with the guide who gave you the brief.

- False guides: there are still many of them in the big cities, despite the hunt for them by the tourist police. They are recognizable by their spiel, their desire to drive you from store to store in the hope of earning a commission. However, avoid being unpleasant, haughty, or dismissive, it is often their only means of survival. If you want to do the tour alone, gently drive them away. Likewise, in the mountains, false guides are numerous. As much as it is not a big deal to be taken by boat through the alleys of a Medina, as much in the mountains, we are no longer laughing!

- The kids: children sometimes offer to guide you. We advise against them. Admittedly, they are often resourceful, but their place is on the school benches. And then beware of them if the police fall on them.

- Venture alone: ​​in the mountains, never! In town, it's just the opposite. Sometimes you have to know how to get lost in the maze of a souk. Touts and false guides are less numerous in the center of the Medina, and the walk is all the more authentic.