In southern Morocco, women's and men's clothing is different from the rest of the kingdom.

The woman adorns herself with the Melfha while the man dresses with the Darâa (gandoura type).

Worn throughout the year, these garments are light, airy, and spacious, perfectly adapted to the climatic conditions of the desert: they protect from wind, sand, and sun.

In general, the garments of both sexes are characterized by elegance and simplicity, thus reflecting the qualities of the inhabitants of the southern provinces that are modesty, decency, humility, and dignity.

These women and men of the South are very attached to their traditional costumes (clothes) transmitted from generation to generation and witnessed the rich heritage of the nomads of the region.

Indeed, these traditional garments are among the most important cultural constituents of local society, an awareness of its distinctive cultural character and a reflection of history, heritage, and customs,
The design of traditional clothing has been affected by religion, climate, and civilization. It corresponds to the instructions of the religion and customs and customs of the region and achieves its objectives of decency and modesty as a fundamental pillar of the Saharawi Moroccan community.


The Daraa and the litham The Darâa is a wide and open tunic on both sides, with a large pocket on the chest called "Ellebna". The Darâa is made of simple cotton, sometimes decorated with borders. Synthetic materials are beginning to become widespread.

The tunic (also called gandoura) is usually blue or white in color. Under the Darâa, Saharawi men wear wide and loose trousers (sarouel type). The Darâa is worn in the desert but also during religious festivals, ceremonies, weddings ...

Given its use and the various and varied advantages, the litham (chèche) is the most important piece of the components of a Saharawi man. This long and wide strip of fabric, from 4 to 10 m, is used in several tasks (no less than 14 different uses). The litham is used by the Saharawi man to protect his head and face from the heat. It can also be used as a light sheet, to sleep in summer, or as a towel after ablutions of the face and hands. Finally, it serves as a bandage for wounds, a rope to tie up camels or draw water with buckets from wells, and a basket to make various purchases... In addition, it brings a significant aesthetic touch that embellishes the port of the Darâa. The Melhfa is a long veil, ample and light, about 3 m by 1.60 m, enveloping the woman from head to toe. It wraps around the body, knots at the shoulders, and covers the hair. 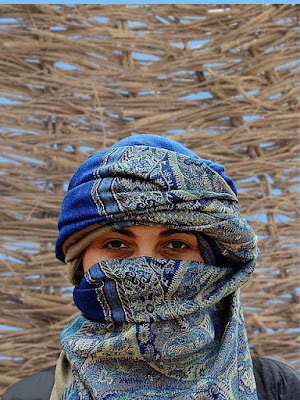 Until a few years ago, it was enough to take a tour of the shopping streets of the Sahara to realize the obvious: the traditional dress of the Saharawi woman is black or blue. These colors protect the body from the effects of the sun's rays and preserve heat.

Nowadays, Melhfa is brightly colored and shimmering. Whether young or old, graduates or not, Saharawi women wear it.

The Melhfa is worn on all occasions: outings, weddings, and other ceremonies... The desert dromedary in Morocco


The dromedary belongs to the family Of Camelids, genus Camelus, in which we find 2 species:

"Called a dromedary: a camel is not incorrect but not very precise."

The female of the dromedary is "the camel" and the little "the camel". We will talk, here, only about the camel Camelus dromedarius, 1 hump. 80% of the world's camel herd is present in Africa: mainly in Somalia, Sudan, and Ethiopia.

The desert dromedary in Morocco The dromedary is a tylopod, digitigrade, herbivorous, and ruminant (with 3 stomach pockets). Its main food is desert vegetation. It can also feed on dried dates, wheat (during the dry period), and, in the case of breeding, different cereals.

The dromedary can last 10 to 15 days without drinking during the "cool" season. During the dry and hot period, it can stay 1 week without drinking. Following intense dehydration, he can drink up to 100 L of water in less than 10 minutes!)

The male is usually taller and stronger than the camel.

The examination of its dentition makes it possible to know its vitality and to estimate its life expectancy.


The desert dromedary in Morocco


The breeding period varies according to environmental conditions (food, water in sufficient quantity, outside temperature, etc.). Gestation lasts an average of 13 months.
The male is put to breed around the age of 6 years, while the female can be put to reproduction around 4 years. Over a lifetime, a camel can beat 7-8 times.

A camel can walk about 100 km per day, without load; 40-50 km per day, with a maximum load on the back of 200 kg. It travels at a pace of 4 to 5 km/h, depending on the weight.
The blathery dromedary. It emits sounds to protect itself (in particular, telling its congeners to stay at a distance).
It emits a low and roque sound, with trembling of the lips, during the rutting period. During this time interval, the dromedary may change its character, drool, shake, have diarrhea and become more aggressive.

In Morocco, there are nearly 190,000 heads (all farms combined). There is no such thing as wild camels.
There are 2 types of camels that are characterized by the color of the dress (from brown/red to white / sand), tribal origin, place of life, and size:

The dromedary is an animal built for desert environments.

The dromedary is an animal perfectly adapted to desert life. It inspires nomads to adapt to these harsh conditions on their own. The body of camels is, in every way, adapted to long walks in the desert and great heat, Their characters also accommodate the hard life of the Sahara. They can be irritable, but they are usually patient and quiet.

In this animal, there are physiological processes of water economy that are carried out through the respiratory, digestive, cutaneous, and renal tracts. Its corpulence, its internal temperature, its head bearing, its long limbs .... everything is adapted to the heat of the Sahara and the lack of water (cf. Caroline DRIOT's thesis cited in bibliographic reference):

Their sinuses are deep and have a "sac" that allows water to be recovered during exhalation through the nasal passages. Dromedaries have the ability to close the nostrils complement, which greatly decreases the drying of the nasal mucosa and prevents sand from entering.

The eyelashes have 2 rows of hair to protect the eyes from sand and wind.

Sweating in dromedaries is very low because of the low number of sweat glands, which limits water loss.
The fats of the dromedary are mainly found in its "hump". This reserve makes it possible to travel long distances without drinking or eating.

The body and essential organs are kept away from the earth and heat by the long limbs. Very rough areas are also present on the knees and on the sternum to protect the animal from the heat when lying down.
Unlike most animal species, heat and dehydration weaken thyroid activity, causing a slowdown in general metabolism.

The dromedary can lose up to 30% of its weight in water, without putting itself in danger (against 12% for other species).
Its body temperature varies from 36°C to 42°C, depending on the outside temperature and hydration.

The urinary volume also adapts to the dehydration of the dromedary and can reach 0.1% of its weight. The elimination of highly concentrated urine explains the camel's tolerance to salts (present in many plants in the Sahara) and to the ingestion of brackish water.

Water deprivation has a significant impact on the volume of saliva produced.

The dromedary emits the driest feces among domestic ruminants: a very large part of the water is reabsorbed by the small intestine. The desert dromedary in Morocco.


The usefulness of the camel in Morocco - Camel breeding

In southern Morocco, the dromedary is an essential component of the economic life of certain populations and constitutes the social base of the Saharawi tribes. Indeed, extensive pastoral farming is one of the main sources of income for the inhabitants of the south and the possession of camels represents "a heritage", a source of pride, and a dowry of marriage.

The dromedary is used for its milk, meat, and hair but also for sports, or as a saddle animal. It is commonly used as a pack animal (portage).

It is practically no longer used as a mode of transport as it once was.


Common uses of the dromedary in Morocco:


Milk: The milk production of a camel depends on the mode of breeding. This varies from 2 to 6 liters per day in the open air (consumption mainly raw by families and the tribe. Butter or cheese with camel milk being very difficult to make); and 12 to 20 l in intensive breeding. Camel milk, with its high content of vitamin C, has many virtues for diabetes, cancer, chronic hepatitis, and allergies. In addition, the fat of camel milk is highly digestible.

Meat: Camel meat is mainly eaten for special occasions, especially large weddings. It remains a source of quality protein: it is lean meat, rich in water and protein.

Urine: traditionally, the urine of the dromedary (especially the urine of the camel at the beginning of gestation) is given therapeutic properties. It is one of the ingredients of the traditional pharmacopeia in southern Morocco. Many medicinal virtues have been observed for the treatment of skin diseases, pain in the abdomen, blood purification ...

Wool: The wool of the camel is smooth and more easily threadable than that of adults. These wools are useful for clothes, blankets, carpets, and tents in southern Morocco.

Leather: The skin is used for stool and straps.

Agricultural work: (very little, in the north of Morocco) often associated with hair or donkeys.
Camel racing during festivals, during dressage...
Saddle and/or portage camels (hiking for travelers, trekking and meharée with a portage of bivouac belongings ....)

Extensive pastoral livestock farming is the most widespread. It corresponds to the movements of herds in search of the best pastures near water points. (example in the Draa Valley, around Mhamid). The great nomadism (permanent movement of herds over great distances) remains undeveloped.

Semi-intensive livestock farming is concentrated around the medium and large agglomerations of southern Morocco and gives rise to the creation of "dairy cooperatives" which tend to grow to meet the growing demand for camel milk.

Camel breeding is difficult but tends to increase. The main difficulties are feeding, for extensive livestock farming, which varies according to climatic conditions. In addition, parasites, infant diarrhea, and skin conditions are numerous.

Trypanosomiasis is the most common disease (transmission through horseflies), which can lead to great weakness and, more rarely, death of the dromedary. Other diseases affect herds such as scabies or smallpox.

These can quickly wipe out camel populations, resulting in huge "economic losses."

In the desert (less affected by major diseases), long droughts and the arrival of the Doubab (camel hippoboscus/spider fly) are sources of stress and constraints for camel owners.

Morocco has put in place a dynamic agricultural policy (the Green Morocco Plan), promoting, in particular, the development of camel herds. On a health level, it is a question of raising farmers' awareness of camel diseases; quarantining new arrivals in herds; setting up veterinary support and monitoring; free supply of medicines; creating dedicated subsidies.