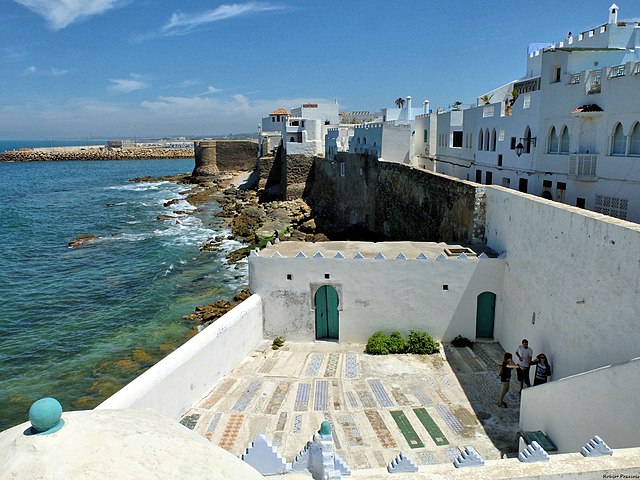 Asilah: The best tours and activities


Asilah is one of the tourist pearls of northern Morocco: it is indeed a city full of charm, located by the sea. We will detail the most interesting visits.

The medina of Asilah


The medina is characterized by the brightness of its sky, the constant sound of the sea in its streets, and the salinity of its environment. The streets are clean and silent, its public lighting is called "Asilah's lantern" and its pavement is the work of local artists.

The houses are white, adorned with murals made by artists; some are being rehabilitated in the Andalusian style, with a mixture of white and indigo blue. The small mosques, very clean, are totally painted white.

The walls that surround the city were built by Alfonso V of Portugal in the fifteenth century. They have several gates, the most important being Bab Homar, opened under a tower with the coat of arms of the King of Portugal, and the Gate of the Sea, next to the Portuguese square tower that dominates the entire city and bears the Arabic name of Bab Kasbah, in the northern area, in front of the cemetery.

Entering through Bab Kasbah, one arrives at Alcazaba Street where there are former Spanish barracks as well as the Kebir Mosque, which has a large octagonal minaret. Since 1988, there has also been the Hassan II Center, a place for international meetings and meetings, which was built on a former barracks and has a modern style adapted to cultural events.

This street ends in the square of Sidi Ali Ben Hamdush, with its small mosque used as a Catholic temple by the Portuguese and dominated by the high Menagen or Portuguese tower, a symbol of the city.

Continuing along the sea, one can see the ancient Spanish schools before arriving at a large Hispano-Moorish mansion, the Palace of Raisuni or Culture. It is a beautiful building with ample lounges and patios decorated in the Andalusian style, which also has long glass doors to the sea.

A few meters away are the court and the picturesque white Muslim cemetery, with multicolored ceramic tombs, where we find the mausoleum of Sidi Ahmad al-Mansur, the Saadian sultan who reconquered the city after the battle of the three kings, and that of Lalla Mennana, daughter of a Sufi leader, on which people suffering from skin diseases come to gather.

Above the cemetery is the Asilah Viewpoint, from where it is possible to contemplate sumptuous sunsets.

If we go a little deeper into the medina and lose ourselves in its clean and narrow streets, we can admire the street of Commerce or Al-Kharazine, a craft street.

Don't forget to visit the Portuguese walls, the gate, and the tower of Bab Homar, surrounded by the Souk Ahfir and an area of popular restaurants.

The marabout sanctuary of Lalla Rahma, located below the fortress, south of the walls, is mainly visited by women and girls who light candles, apply henna and gather to ask for work or good grades at school.

Next to the entrance to the medina, it is worth mentioning the marabout of Sidi Ghaylan, a highly venerated regional saint who died in the nineteenth century.

The Jewish cemetery, meanwhile, is located outside the walls, south of the medina, and right next to the sea.

Since Asilah has an interesting and fortified old city, the military and civilian settlement was very strong during the protectorate.

The new town extends in a grid north of the medina and in front of the port. Its main street, Avenue Mohamed V, gives access to the city from Tangier.

In this district, we can highlight the church of San Bartolomé, built-in 1927 by the architect and brother Francisco Serra, with its two bell towers with baroque elements.

From the Spanish protectorate, the town hall, the post office, the market, and the bus station have been preserved next to the church, as well as the fishery in front of the port, the Magali cinemas, the former Barracks of the Mehala, and the casino near Mohamed V Square.

Among the current buildings stands out the new Prince Bandar Ben Soltane Library.

A modern and touristic city located in the south, in a rural area in front of the sea. It is an area of cliffs where a beautiful golf course, housing, and a marina have been built.


The craftsmen of Asilah work in the old medina, at the level of the street of Commerce or Al-Kharazine.

A craft center has recently been inaugurated with workshops and exhibition halls. 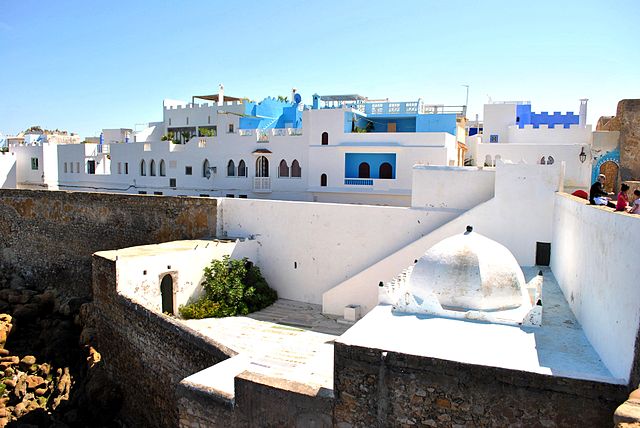 Transport between Tangier Airport and Asilah

Taxis have a monopoly on transport at Tangier airport. There are no buses or shared taxis. Or you have to walk almost 30 minutes to catch them "at the roundabout". As the airport is located between Tangier and Asilah, we took a taxi directly to Asilah, without going through Tangier. The rates are fixed and displayed: 200 dirhams / 19 € for about 35 minutes drive.

If you arrive from Tangier (city) or if you go there after Asilah (this was our case), it is possible by bus, collective taxi or train. We opted for the train: a handful of departures per day, duration 1h, price 16 dirhams / 1.51€ in 2nd class.

We booked our apartment through Booking, in the residence called El Hambra 2. Eight apartments of different standings are offered whose prices vary from single to double depending on the season. We had booked the so-called "1 Bedroom Apartment" for 30€, but we were kindly upgraded to the "2 Bedroom Apartment". The photos do not pay tribute to him: he is tall, beautiful, perfectly equipped and the terrace facing the sea is... Great!

Have breakfast in the medina

Several tiny cafes hide in the medina. The one we have adopted has no name, so you will have to spot it by its yellow sun visor, right next to the Ayoub art gallery. He is a very small boui-boui with a nice and smiling manager. Breakfast at 20 dirhams / 1,88€ per person.

The Dar Al Maghrebia is a very simple restaurant, with a very classic menu, but we enjoyed ourselves: eggplant salad, vegetarian tagine (to ask because it is not on the menu), cinnamon oranges, Moroccan cakes ...

The beaches of Asilah are one of its main tourist attractions. Its vast white sand beaches are ideal for walking and enjoying water sports. Located north of the city, they extend over several kilometers.
They are frequented by surf lovers because of their orientation and swell. Many people go there to see the sunset.