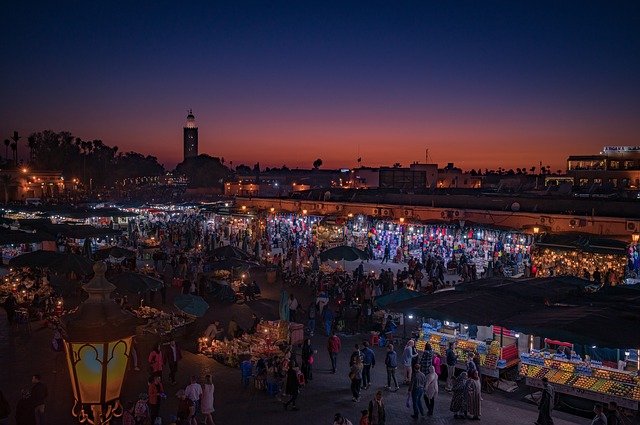 Djemma el-Fna has been the heart and spirit of Marrakech for generations, bringing people together to socialize, dine, shop, and be entertained. It is still the city's lifeblood today. A site where you can be charmed by snake charmers and acrobats, have your hands tattooed in henna, haggle over the price of dates and spices, and retire to one of the rooftop cafes to take in the show with a glass of mint tea when it all becomes too much.

The name means "Assembly of the Dead" in Arabic, and its origin is unknown, adding to the mystical atmosphere of the plaza. Locals just refer to it as "la place" (the square). Centuries ago, caravans from all over the Sahara Desert came here to exchange gold, medicines, and slaves, among other things. It was a procedure that had been carried out since the year 1000 BC. A permanent city, and with it the Djemma el-Fna, did not emerge until the 11th century. It is stated that today's entertainment is identical to that which was provided for passengers all those years ago.

Marrakech appears to be developed around Djemma el-Fna, which is located in the heart of the Medina, or "old town." On one side, the enormous uneven square leads to the souks. The souks are a vast maze of narrow, congested lanes filled with kiosks selling carpets, spices, metal and woodworks, and tourist toys. It is simply impossible to stroll around the stalls in peace. A quick glance at the clothing on offer may easily lead to a lengthy talk with an eager market dealer, and before you know it, you've purchased a carpet or some spices.

Numerous cafes surround the area, where you can sit at a table and watch the action, or climb to the rooftop tables for a view of the square and the maze medina that surrounds it from above.

During the day, orange juice and date vendors abound in Djemma el-Fna. Food carts drive in and set up in the middle of the plaza as the sun sets, and it's not long before smoke fills the air and hawkers appear out of nowhere, genuinely attempting to persuade you that their booth is the best, serving the tastiest delicacies. There are a variety of Moroccan delicacies available. From snails and couscous to kebabs and sheep's heads, there's something for everyone.

Without its characters, Djemma el-Fna would be nothing. Water vendors, who are always there, dress up in flamboyant costumes and enthusiastically pose for photographs (for a fee of course). At the same time, musicians, storytellers, snake charmers, acrobats, monkey trainers, tooth pullers, and henna artists vie for your attention (and money). Those who make a career off tourism have mastered the art of soft persuasion, and when that fails, the art of not-so-gentle perseverance.

Djemma el-Fna is more than a sight to behold; it's an experience not to be missed. It is absolutely unlike anything else on the planet. Sounds, sights, and fragrances create a symphony. It is evocative of Morocco itself: exotic, dramatic, challenging at times, but always rewarding.