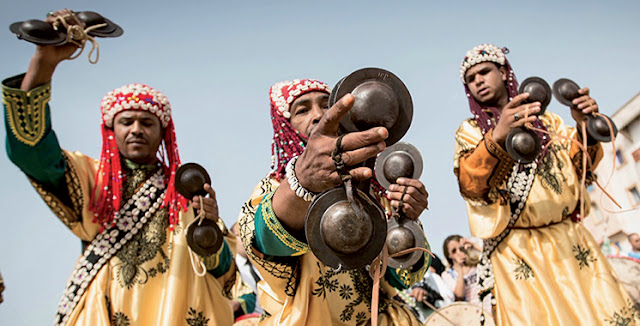 The Gnaoua and World Music Festival is a Moroccan music festival created in 1997 to promote the culture of the Gnaouas (Haratin artists descended from former slaves) it takes place in the Moroccan city of Essaouira at the start of each summer.


The Gnaoua and World Music Festival of Essaouira was stabilized in Essaouira in 1997 before each Gnawian "Maalem" invite the other Maalem to establish the festival in its commune or city - The concept "FESTIVAL DES GNAWA" starting in 1962 in Agadir for the first time - 1963 Essaouira - 1964 Chichaoua - 1965 Megouna ... 1995 Kelaa Seraghna - 1996 Taza - 1997 Essaouira . The creators wanted it to be a story about chance encounters, mergers, and openness to the outside world.

This festival, produced by Neila Tazi, has set itself the central mission of preserving, enhancing, and promoting Gnaoua music and culture in Morocco and around the world. To allow the Maâlems, custodians of a long musical and mystical tradition, to go on stage alongside universal artists and create unique moments of music.

Over the years, the festival has allowed thousands of meetings between musicians from four continents. Millions of music fans of various ages, nationalities, and cultures have visited. 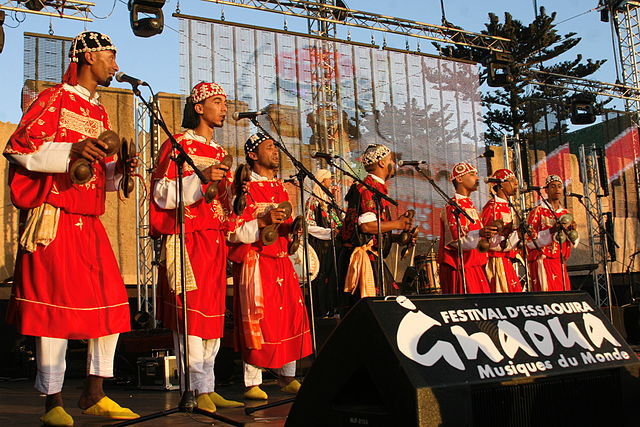 the Gnaoua Festival Tours edition of 2022 will cross the cities of Essaouira, Marrakech, Casablanca, and Rabat, from 3 to 24 June 2022


The Essaouira Gnaoua and World Music Festival reinvent itself as the Gnaoua Festival Tour. Special edition than that of 2022. The tour takes the form of a festive and musical caravan that will crisscross 4 major cities of Morocco to meet an acquired audience.

The tour will take place from 3 to 24 June, with a first stop at the cradle city of the festival, Essaouira, to head after to the ocher city, Marrakech, After that, Casablanca, and lastly Rabat will host the event's conclusion.

Eleven "maâlems", masters, of the most famous, give an appointment to the public, for performances of colorful musical fusions and concerts of the pure Gnaoua repertoire.

A key event, the Malian Vieux Farka Touré, nicknamed the "Hendrix of the desert", meets the maâlem, virtuoso of African music, Abdeslam Alikane, accompanied by Aziz Ouzouss, champion of Amazigh culture. 12 concerts are on the program.

Marrakech ensures the continuation from June 9


Jazz is not to be outdone. The artist who has redefined the artistic potential of the bass, and who since the 70s has been playing with the greatest, Jamaaladeen Tacuma, will be accompanied by Ronnie Burrage, on drums, and Kelvyn Bell, on guitar. Together, they will share the stage with the bewitching maâlem Saïd Boulhimas. Maâlem Moktar and his project Gnaoua Soul and Maâlem Houssam will give a concert accompanied by six talented musicians.

Marrakech ensures the continuation from June 9, at the Mégarama, with two of the largest maâlems Gnaoua. Abdelkebir Merchane and Mustapha Baqbou will perform with a group of musicians on stage. A second concert, slated for June 10, will feature Moroccan colors. The master Gnaoua, Abderrazak El Hadir, will invite three musicians of the new generation, to the Center Les Étoiles of Jamâa El Fna. There are five concerts in all in Marrakech: two merges and three Gnaoua concerts.

In Casablanca, the Gnaoua Festival Tour opted for the musical mix for 3 days. The Mohammed V stadium's esplanade will be used as an open-air stage. Maâlem Hassan Boussou, a fan of fusion, invites on stage the English folk singer, Piers Faccini, as well as the guardian of the temple of Moroccan song Soukaina Fahsi.

Gnaoua Festival Tour in Casablanca includes some surprises. Nine concerts including 4 mergers, 3 Gnaoua concerts, and 2 100% energy concerts. On June 16 and 17, at the Esplanade Mohammed V Stadium and on June 19 at the Touria & Abdelaziz Tazi Foundation (L'Uzine).


Rabat will be the Festival's final stop. Jazz will once again demonstrate that it is a welcomed visitor. It is a very special concert that the Gnaoua Festival Tour will offer at the Mohammed V National Theatre on June 23rd. Avishai Cohen, considered one of the pillars of jazz and a genius composer, will perform with the maâlem, Hamid El Kasri, as well as Émile Parisien and Vincent Peirani. They will be accompanied by Moroccan singer Nabyla Maan.

The blues will also be there on June 24. A mixed blues with the Majid Bekkas Afro-Gnaoua Blues Band, at the cinema La Renaissance. The Gnaoua Festival Tour will close its tour in Rabat with five concerts; 2 mergers, 2 Gnaoua concerts, and 1 jazz concert, on June 23 and 24.

In total, over 150 musicians from 15 nations will share their love of music with the general people. More than 30 concerts will be presented through the enchantment of various locations. The Gnaoua Festival has returned after a two-year hiatus. It is as much an invitation to travel, and an opportunity to celebrate the inscription of Gnaoua art in the Intangible Cultural Heritage of Humanity of Unesco.