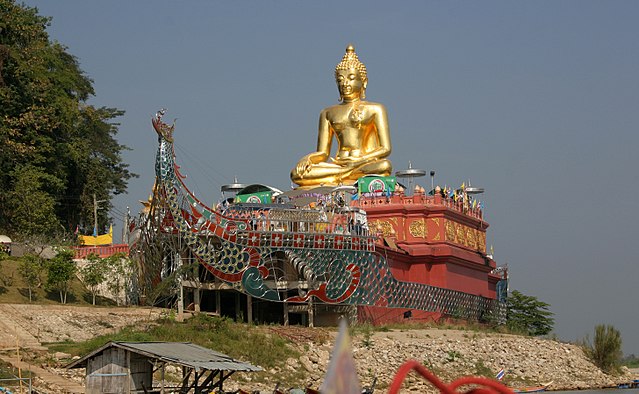 The Golden Triangle refers to a border area near Chiang Saen in Northern Thailand where Cambodia, Myanmar (Burma), and Thailand intersect across a section of the mighty Mekong River. Once the center of the illegal drug trade in South East Asia, the Golden Triangle has been redeveloped for tourism and contains many special attractions worth seeing.

We made our way to the Golden Triangle from Chiang Rai in a rented car, It’s a very easy drive down Highway 110 for 30 km or so from Chiang Rai then right onto Highway 16 for another 30 km or so and the roads are reasonably wide and well sign-posted, although there was a lot of road reconstruction happening in some parts following the disastrous flooding in Northern Thailand the previous year. You could also do this comfortably on a motorscooter or motorcycle (but read our 10 tips for riding motorbikes in Thailand first).


On the way, take a little time out to explore the ancient town of Chiang Saen, once a large fortress city in the Thai Lanna kingdom and King Menrai’s capital prior to Chiang Rai. It’s a town that’s been invaded by various different groups over the years and was pretty much destroyed by the Burmese in the 16th century, abandoned, and left empty for a century. Only since the early 1900s have people begun to come back to the town, but there’s a lot of history in the ruined temples and palaces and the surviving rampart walls of Chiang Saen to attest to its former glory and prominence.

If you decide to spend a little more time in Chiang Saen, there are a few other attractions close by worth seeing before you head on to the Golden Triangle itself, including the once majestic (and still impressive) Wat Phra That Chedi Luang, a 3rd-century temple with an 88m chedi and some ruins of ancient temple buildings; Wat Phra Chao Lan Thong which features a 1200 kg statue of the Buddha and a cast bronze Buddha; and the elaborately decorated Wat Pa Sak which dates from the late 13th century and reputedly contains some relics of the Buddha. And if you happen to be in Chiang Saen during Songkran (12-18 April) you can catch the boat races on the Mekong River as well as the statues being paraded along the streets.

It’s only a very short trip from Chiang Saen to the Golden Triangle proper, where you’ll find lots of attractions to explore including a huge golden Buddha statue that looks out majestically across the Mekong River, lots of spots where you can take a commemorative photo, the Hall of Opium where you can find out about the history of the drug trade in the Golden Triangle region (200B entry fee) and even catch a small boat across the Mekong for a “secret” trip into mysterious Laos (actually you’ll be taken to a small Lao island called Don Sao and it is technically in Laos although you don’t actually need a visa to go there).


On a clear day, you can see across the Mekong River to the new casino built on the Lao corner of the border which attracts lots of Chinese gamblers. You can also wander down to the port on the Thai side of the river to watch cargo vessels from China being unloaded to supply the burgeoning tourist trade in the area. There is a ferry service out of Chiang Saen that runs all the way up the Mekong to Jinghong town in Xishuangbanna, Yunnan, China (only when the river is flowing well).

After exploring the Golden Triangle, you may still have time to take a diversion on your way back to Chiang Rai through the town of Chiang Khong, which doesn’t have a lot to see but does boast a good market on Fridays and some craft villages that are worth a look. If you want to continue your journey into Laos, you can cross the Mekong River at Chiang Khong to the Lao town of Huay Xai which has connections to Vientiane by bus. But you can only get a 15-day entry visa at the Lao border.

Exploring outside Chiang Khong you can visit some nearby Hmong and Lahu hill tribe villages near Gyu Gaan (about 10 km away).
Places to stay at the Golden Triangle

If you feel like spending a night or two in the Golden Triangle region, there are a few places to stay nearby, but only one is really worth the money:

Morocco in Motorhome: tips and itineraries