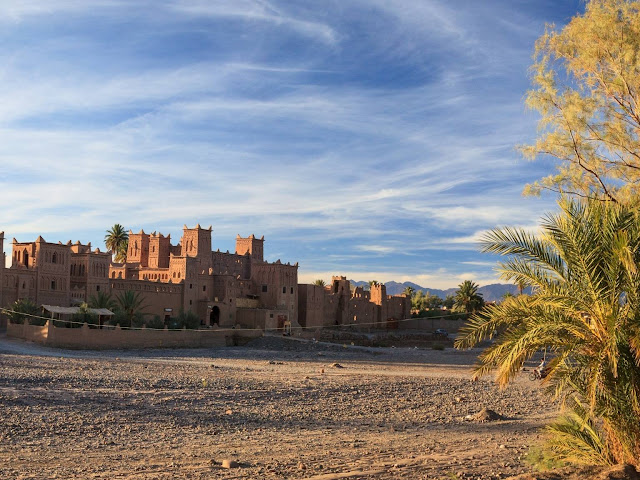 In the South, you will come across these superb fortified adobe buildings in the middle of the palm groves. The Kasbah, which was once the lord's home, has played an important role in Moroccan history for centuries. It served both as a shelter for harvests and as a refuge for oasis dwellers from desert looters.

Like all traditional houses in southern Morocco, the kasbahs are built of rammed earth, but on stone foundations.

The kasbahs have 3 levels:

• the ground floor is devoted to animals, with a stable and a room for agricultural activities;

• the 1st floor is the central space, reserved for women, with its open-air kitchen;

• the 2nd floor consists of the reception room, where the men meet. The whole is topped with a terrace.

Some of these kasbahs, listed as World Heritage Sites by Unesco in the late 1980s, are the subject of a conservation program.

Several kasbahs form a ksar (in the plural ksour), that is to say, a fortified village with covered streets.

The riad and the dar

Do not confuse: in the very touristy medinas of imperial cities such as Marrakech or Fez, the term “riad” is used, by abuse of language, to designate the traditional houses built around interior courtyards. However, the term riad means “enclosed garden”: it is always on one level. While dar means "house" and has up to 2 floors, a reception room on the ground floor, and a terrace. Most of the interior courtyards were planted with 4 parterres or 4 trees surrounding a fountain, on the model of the Arab garden.

Family life is organized around these inner courtyards, the different rooms not necessarily communicating with each other. It is often necessary to pass through the central space on which the windows overlook, while the walls facing the street often have no opening. There is nothing, therefore, to make it possible, from the street, to guess the splendor of these riads, hidden behind their blind walls.

Depending on the wealth of its owner, the size and number of rooms in a house vary, but it is above all the interior decoration that will make the difference.

It is the habitat used by nomads in transhumance with their herds.

The brown tent (khaïma) is woven from sheep's wool or goat's hair. There is a space reserved for women and children, and another reception area, which the men use to sleep. The floor is covered with mats, rugs, and cushions. 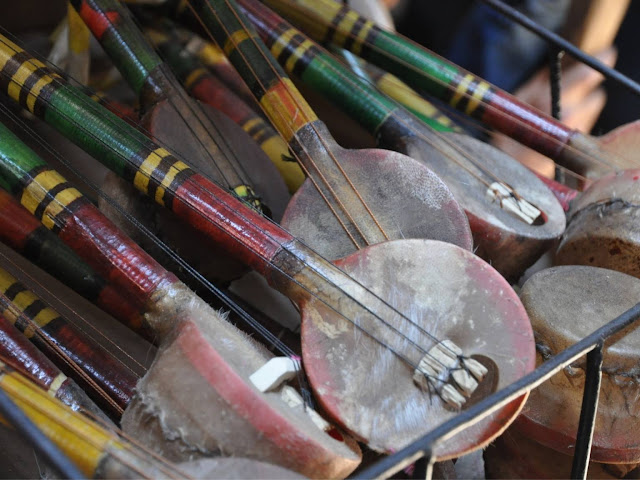 Unlike many countries where traditional music has been relegated to the rank of folkloric attraction, in Morocco it remains very present (especially on the radio). Most varied, and constantly evolving, it has, since its origins, been sung in Darija, the Arabic of the streets and the countryside.

Moroccans have developed a musical form of their own: the melhoun, originally (12th century) purely vocal, which was then discreetly accompanied by oud or guembri (Arabic and African versions of the lute) or violin before giving way to percussion. Since the birth of the genre, this sung poetry has evoked daily life in the medinas, love, and politics...

Derived from melhoun, châabi is the popular music par excellence that Morocco shares with Algeria, Tunisia, and Egypt. Festive music and dance with light texts, the châabi seduce even the younger generations with artists who mix pop or electro with traditional instruments: bendir, darbouka, oud... And the Moroccan châabi has revealed many singers.

On the other hand, today we hear much less raï, another derivative of melhoun, seriously dusted off by a new generation (the Cheb) in the 1980s.

It is impossible here not to evoke the music of the Gnaoua descendants of slaves, with heady rhythms that call trance. Berber (or Amazigh) music is also inseparable from dance and has kept all its authenticity in its pastoral isolation. The songs and dances of the peasants, inspired by the beauty of the Moroccan landscapes, are magnificent shows. They change character according to the regions and the tribes, but very often have a religious function, since the name of God is invoked... The best-known traditional Berber music is the very rhythmic dakka marrakchia. In another register, Yuba is a singer who makes known the Amazigh culture, by singing about love, but also the current problems of Moroccan society.

You should also, randomly in a street, hear procession music, which gives pride of place to a kind of very shrill oboe, the ghaïta (reminiscent of the Breton bombarde), and the tabala drum. During important events, a long straight trumpet, the nafir, is also used.

Known as Arab-Andalusian music, it is court music usually played and sung in the big cities of the North. It was above all entertainment for men of letters and scholars, the texts always being of high quality.

Also classical is the music of sacred inspiration which comes from Sufism. Sufism developed the art of sacred chanting (for male voices).

Admittedly, in the 1970s, the big English groups fell in love with the country, and the Casablancais of the Variations made a small reputation for themselves in France, but the rock never became popular in Morocco.

But, in this same decade of the 1970s, a new music scene appeared with groups that revisited the Moroccan tradition. Like Nass el-Ghiwane, trained in Casablanca and is still active. The nayda movement (literally “it rises”, “it moves”), comparable to the Spanish Movida, saw the emergence in the early 2000s of groups that fuse rock, reggae, rap, traditional music (and somewhat caustic lyrics) like Hoba Hoba Spirit or Hausa.

Finally, rap, a cultural expression of poor neighborhoods, has become widely established in Morocco, where it is now experiencing its golden age.

You will undoubtedly attend some folk dances, the majority of which will be group. The Ahouach, which is danced by women while the males set the rhythm by hitting the bendir, may be seen in the High Atlas, in Chleuh nation. The Gnaoua have maintained their traditional African rhythms. Their demonstrations are held in Essaouira and Marrakech, as well as in a few tiny villages near Merzouga (Khamlia). Regrettably, these "shows" are becoming increasingly unauthentic.