Ayutthaya, located 75km north of Bangkok, is an easy day trip from the capital, and a great place to spend a few lazy days away from the smog and traffic and explore some of Thailand’s amazing history. To save you any embarrassment, Ayutthaya is pronounced by the locals as “a-yoo-tea-a”.

It was once one of the largest and most ethnically diverse cities in the world, with a population of over one million people, but that was back in the 18th century. European visitors reported back on a city covered in gold, with a port to rival anything in Europe and the most beautiful and magnificent palaces they’d ever seen. But that was before Burmese armies invaded the city in 1767 and pretty much destroyed it. Today you can still get an idea of just how grand Ayutthaya must have once been, but most of the famous structures are now just crumbling ruins. 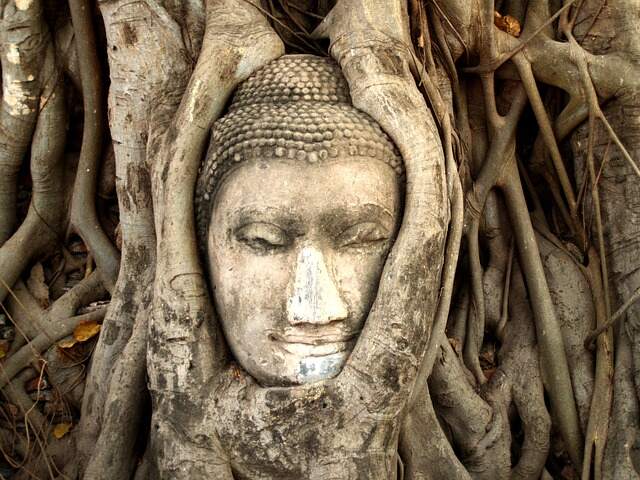 Because it’s very close to Bangkok, it’s a popular side trip for many travellers to Thailand. The easiest way to get there is by train from Hualamphong, the main railway station in Bangkok. Trains leave about every hour or so between 7 am and 10 pm and take about 90 minutes to get to Ayutthaya. The cost is only 20B or so for a second-class seat. There are no reservations and you just have to get aboard and hope you get a seat. When you get there, you need to take a short ferry trip from the railway station to the island itself. The ferry costs about 5B.

Once on the island, navigation is really easy as there is one main ring road that goes right around it and you can just follow that to see almost everything important. If you can be bothered to walk, there are bicycles available to rent for 30B or so and they come with a free map. If you’re feeling too lazy even for that, there are actually tuk-tuks that will cart you around the island, waiting for you at each stop, at a cost of about 300B per hour or 2000B for the whole day. They carry up to six people and the price is the same for 1 or 6. If you haggle hard you can get the price down a bit lower.

Ayutthaya is mainly about history and temples, so if you’re not big on either of those you might want to spend your money somewhere else.

There are seven or so main temples (wats) scattered around the island. The biggest is called Wat Phra Si Sanphet and was one part of the royal palace grounds, containing a solid gold 16m statue of the Buddha. But that was pinched by the Burmese and melted down for jewellery.

There is still one big Buddha statue in Ayutthaya (though not made of gold, sadly) which is housed right next door to Wat Phra Si Sanphet in the Viharn Phra Mongkol Bopit. There are also lots of other smaller Buddhas, most of which have no heads.

In the southeast corner, you’ll find the remains of the Phet Fortress, which once defended the island (though sadly not very well, it seems). You might see this as you get off the ferry from the railway station.

As well as the temples and palace ruins, there are three museums on the island where you can see what’s left of Ayutthaya’s former grandeur and wealth. The few remaining gold statues that escaped the Burmese invaders are now kept in Wat Phra Mahathat (look for the headless Buddhas) and Wat Ratchaburana.

There are some renovations happening in Ayutthaya and a great example of these is the Phra Chedi Suriyothai, a stunning white and gold chedi built to honour a former queen of Thailand and carefully restored to its original beauty in the 1990s.

Off the island, there are some other wats worth visiting including Wat Chaiwatthanaram and Wat Na Phra Mane.

Because Ayutthaya holds such religious and cultural significance for the Thais, you must remember to dress appropriately when you go there. Cover up your arms and legs. Don’t mail the statues and don’t feed the stray dogs.

See a map of Ayutthaya from Wikitravel.

There is a lesser-known floating market in Ayutthaya called Klong Sabua which is more popular with Thai tourists than foreign travellers.

It’s only open on weekends and public holidays from 10AM to 5.3oPM. I have heard it was closed down for a while due to the floods in this part of the country – hopefully, it has re-opened by now.

The main attraction is a Water Theatre, said to be the only one of its kind in Thailand, featuring live performances of Thai folk tales and Sepaa musicals. 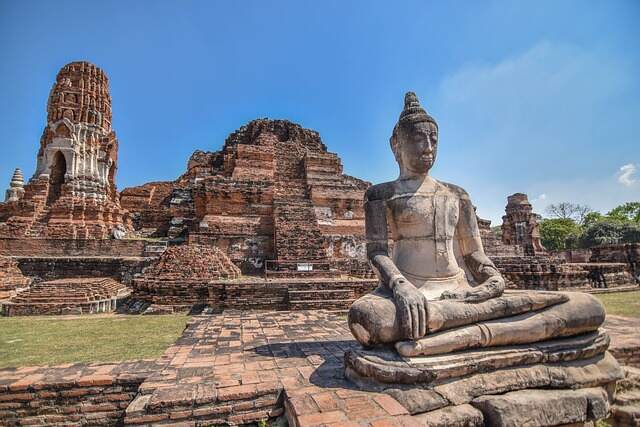 Now if you happen to stay overnight in Ayutthaya, there is a night market that has a variety of goods to buy and some pretty good street food and restaurants as well.

Krungsri River Hotel is a 4-star hotel with 204 rooms, also on the riverside in Ayutthaya. It has great facilities including a well-equipped gym and fitness centre, pool table, stylish bar and three restaurants – even a bowling alley. All rooms are very spacious and comfortable and have river or city views, but they don’t have coffee-making facilities in the room which is odd. It’s very easy to take a ferry across the river into the historic ruins of the old Thai capital.

Ayothaya Hotel is an attractive 3-star hotel with 117 rooms on Naresuan Road about 1km from the city centre and close to the train station. Be careful when you book because some of the cheaper standard rooms don’t have windows! The hotel has a spa and swimming pool, family rooms, a coffee shop and a massage room. Nothing very luxurious about this hotel but it is convenient and reasonably cheap.

Ayutthaya Garden River Home is another smaller 4-star hotel on the riverside with only 12 rooms, so more like a guest house than a hotel. There are not a lot of facilities here although it does have a restaurant, jacuzzi, fitness centre and swimming pool and some well-landscaped gardens to stroll around in. The location is near Bag Pa-in Palace on the banks of the river, so very pleasant views, but it is a fair walk into town from here. Recommended for its friendly staff and its great breakfasts.

Baan Thai House is a group of 12 villa-style bungalows located about 1 km back from the Chao Phraya River behind the Ayutthaya railway station, close to Wat Kudi Dao and Wat Maheyong temples. The rooms are very pleasantly simple but stylish, with big comfortable beds. The villas are set in landscaped gardens with a restaurant, spa and swimming pool. Some rooms have an outdoor bathroom which is really novel. Baan Thai House is known for its hospitality and good food.